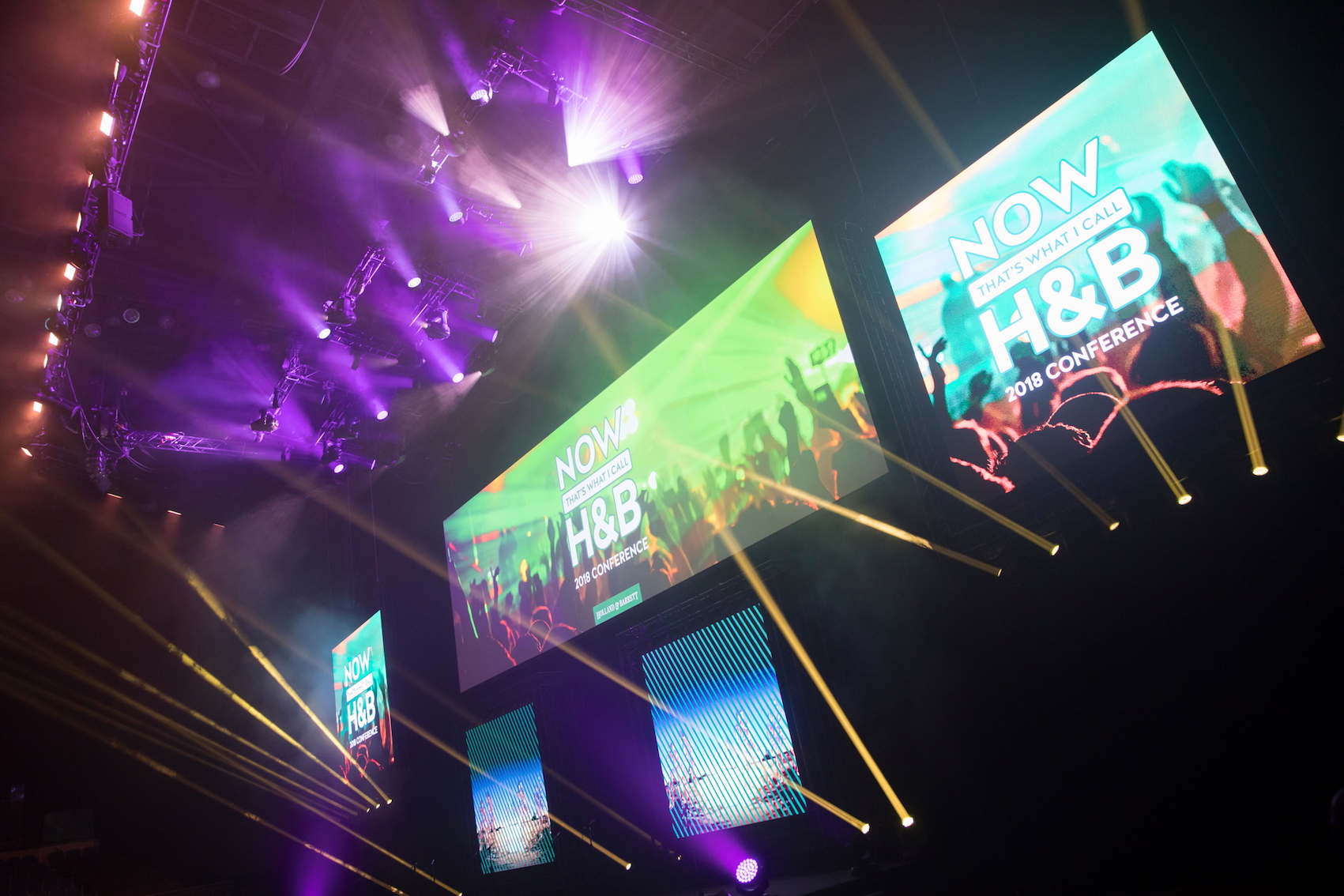 Well it has been a while!  The only excuse we have is that we’ve been busy. Very, very busy! Since the last blog post, we’ve delivered five events; three of them, our biggest of the year, if not Meet & Potato’s entire history.

Amongst those five events, we delivered a conference for a new client – the lovely Solvay, as well as producing Poundland’s most ambitions event to date. To really celebrate all things Dunelm, we took their annual seminar home to their Head Office in-line with their ‘Back to Mine’ marketing launch, and most recently, we delivered Holland & Barrett’s ‘Now That’s What I Call H&B’ conference, at Liverpool’s ACC.

And what a conference it was!

Having undergone some change since the previous H&B conference two years ago, the company wanted to show its 1700 store managers, new members of the Exec team, and its new owners, Letter One, exactly what it’s made of. So, briefed with producing an awe inspiring, arena standard event, we got to work!

Included in the day’s agenda was an impressive supplier exhibition, four breakouts (each hosting an audience the same size as an average main plenary), main stage sessions to top and tail the day, plus as a gala dinner and awards evening. It was jam packed! And we were intent on ensuring that every single moment was as exciting, impressive and action packed as the last.

Given the conference theme’s musical nod – we threaded it throughout the entire day starting with striking design & branding, plus fun and colourful motion graphics in the exhibition space. Not to mention a raised DJ deck with some pumping music to get the day off to an energetic start. Video graphics signalled the delegates to ‘move on in’ to the main plenary where they awaited an outstanding opening performance from Sense of Sound whose singers appeared from the audience and stormed the stage with their powerful voices. Motion graphics were used to support the performance, bringing it to life; five screens exploded with colour and movement. An exciting and impactful opening experience that well and truly set the scene for the day ahead.

Starting on such a high the conference went from strength to strength! The LED screens featured in the breakout spaces were a real presence, allowing us to add vibrant colour and style to the content. Using a variety of communication channels, including actors, video, presentation and interactive platform Sli:do, key messages were delivered loud and clear. Namely that Holland & Barrett is looking toward a very bright future! This message was echoed throughout the design, branding, production and content – the immersive environment flaunting big scale and high standards.

Before heading off ahead of the dazzling gala dinner, delegates were brought back together to hear CEO Peter Aldis’s closing remarks, but not before the 1700-strong crowd recorded their very own single. A single that was then used as a soundtrack to the well-received conference highlights video, shown at the awards ceremony later that evening.

This event was one of the biggest celebrations of success that Meet & Potato have ever created. And whilst we are really pleased that our client is driving forward with such momentum, we mustn’t forget the part we had to play in bringing the entire thing together.

For Meet & Potato, this event in particular was a glorious endeavour of blood, sweat, tears and teamwork. But when it drew to a close, we realised that every second was worth it.H&B might be on their way up, but they’re not alone. We have set ourselves a new bar; and we intend to scale that and keep on going.